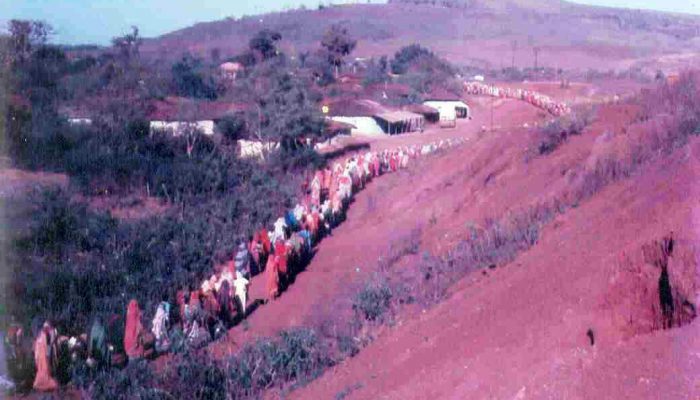 Adivasis have a long tradition of drinking liquor. During festivities, marriage celebrations they drink Mahua, Todi, Salfi (a type of bear typical of Chhattisgarh). But they drink in a way that doesn’t disrupt the fabric of the society.

But in Dalli Rajhara and other mining habitats it became a menace. Different types of people other than adivasis settled down in crowded shanties which included truck drivers, helpers shopkeepers and so on. And the vices of slum culture creeped in.

All these I learnt from Niyogiji and his comrades during my first trip to Dalli Rajhara in 1981. They realized how liquor was destroying the workers’ homes. Many on pay day would get drunk, fall asleep in the pavements, beat up their wives and children and little money left for their daily rations.

As part of the overall social change CMSS started an all-out programme to change the workers’ lives including culture, health, education, sports and so on. Anti-liquor activity was a part of this overall programme.

Anti-liquor campaign started long before I landed in Dalli Rajhara. Niyogiji initiated this movement after discussions with his comrades, gave lectures in mass meetings on the vices of liquor and they all made house to house campaigns.

Well, it had its effects. Many workers gave up liquor completely. But some still did.

And then Niyogiji played his trump card. He asked Mahila Mukti Morcha to take over.

The drunkards who did not give money for family expenses or beat up family members were individually called in Mahila Mukti Morcha meetings. Twenty to thirty women leaders would deliberate on the culprit’s misgivings and then punish him.

The punishment usually had two forms. The culprit would be asked to pay a hefty fine. The fine when collected, was secretly handed over to the culprit’s wife.

The other interesting form of punishment was attending Suresh Babu’s Marxism classes for a period of say fifteen or thirty days.

In the evening fifteen or twenty of the culprits would sit around Suresh Babu in one corner of the union office and listen to his lecture for an hour or so. It was indeed a torture for them, I presume.

Another subtle strategy Niyogiji used was that he would ask one or two regular drinkers to accompany him the whole day. They would remain with him wherever he went and could only go back home late at night.

One day I was sitting in the union office silently listening to Niyogiji discussing various programmes with four or five other workers, when one worker entered the office room and informed Niyogiji that one man had been found to brewing todi in the outskirt of a worker’s muhalla.

Neogijy promptly got up and entered the jeep with three of the workers and the informant and started for the destination.

Silently I also got up at back of the jeep. Seeing me in the jeep Niyogiji raised his eyebrows, but said nothing.

In a short time we reached the shanty where liquor was brewed. It was in a desolate place indeed. On knocking a couple came out with a eight or nine year old boy and started pleading. Nevertheless two of the workers went inside the hut and brought out two large earthen pitchers full of liquor.

The workers smashed the pitchers on the ground, while the couple started crying. It was their only means of livelihood, they said.

Niyogiji talked at length with the couple and then asked his comrades to build a pan biri shop closure to the muhalla. The union would pay for it.

And then he noticed that the boy was limping with pus oozing out of a wound from one of his shin bones. He asked me to look into it and see if I could treat it.

Postscript : The boy had bone infection ( Acute Osteomyelitis) and he recovered completely within a couple of weeks. Lucky for the boy and lucky for me.

Sankar Neogi had a rare quality of leadership. He was always with the people. This essay has proved the same.nicely.