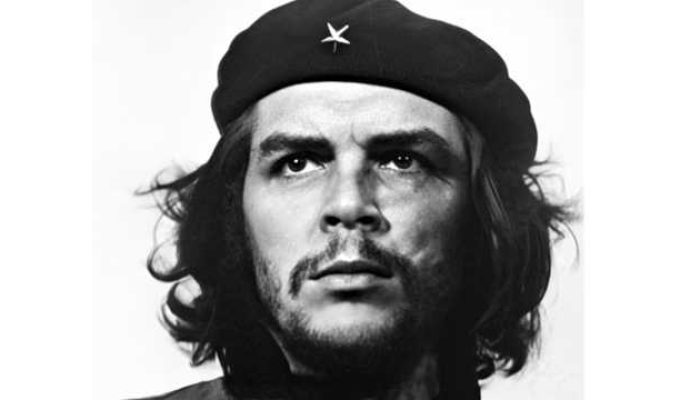 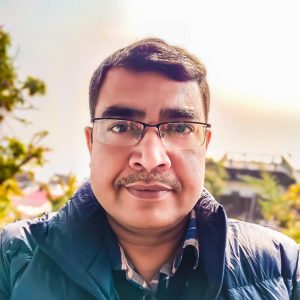 Health Administrator
My Other Posts Born to upper-middle class Argentian parents on June 14, 1928, Che suffered from acute asthma during his early life. But with his will power, he overcame and got admitted to the University of Buenos Aires in 1948 to pursue a medical course. Notwithstanding his acute bouts of sickness, he engaged himself in various sports like soccer, rugby and swimming. Guevara also loved reading and playing chess. He reportedly had more than 3000 books at his house and took part in numerous chess competitions since his adolescence. He often used to go for fishing together with Castro and Ernest Hemingway. He believed that all life was an act of will. “Any task, no matter how daunting could be solved by dint of enthusiasm, revolutionary fervor and unbending determination”, he said. 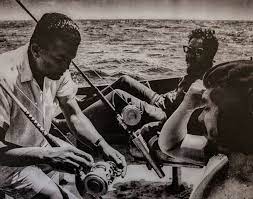 In 1951, while still a medical student, he took a road trip across Latin America that changed his life. This eight-month journey across international boundaries was of discovery and awakening. As he made his way north through South America, Che witnessed injustices and inequalities that filled him with indignation. ‘I will be with the people,’ he wrote in the journal ‘Journey.’ ‘I will dip my weapons in blood and, crazed with fury, I will cut the throats of my defeated enemies. I can already feel my dilated nostrils savoring the acrid smell of gunpowder and blood, of death to the enemy.’ During this trip Che and his friend worked as labourers and volunteered at the San Pablo leper colony in Peru on the banks of Amazon river. The journey brought a fundamental change in him as he was deeply affected by intense poverty that he saw in every corner of the continent. These journeys brought him face to face with the economic hardships of the people of Latin America. This is also where he recalled seeing the most impressive example of solidarity and loyalty among the men who had nothing materially. The solidarity that he sees among the lepers is how he thought all of society should operate. 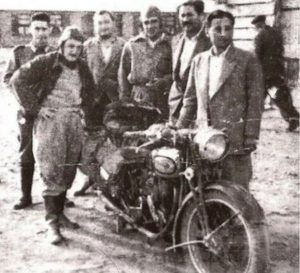 One year later, having completed his medical degree, he left Argentina for his second world tour. He had spent five weeks in Bolivia and nine months in Guatemala, where he witnessed the overthrow of reformist president Jacobo Arbenz by a CIA-backed military coup. The events forever fixed his hatred of the United States and its imperialism. In Guatemala, he met an exiled Peruvian revolutionary named Hilda Gadea who would later become his first wife. This woman introduced Che to Marxism and to exiled revolutionaries from Cuba and other countries. By then he became a convinced Marxist.

In 1955, he was introduced to daring exiled Cuban rebel leader Fidel Castro, and their short meeting created magic in world history. ‘By the small hours of that night I had become one of the future expeditionaries,’ Che later wrote. Castro’s passion and Che’s ideas ignited each other and he joined the Cuban revolution as a doctor. ‘It was like Lenin and Trotsky, like Hitler and Goebbels, like Mao Tse-Tung and Zhu De,” journalist Georgie Anne Geyer later wrote somewhere. Che distinguished himself, outperforming every Cuban while training in Mexico, despite his bouts of asthmatic attacks. 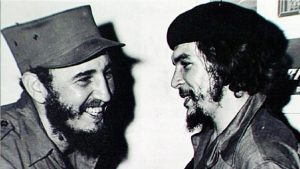 Fleeing a fusillade of enemy bullets at the Alegria de Pio, Cuba, in late 1956, the soldier in front of him dropped a box of ammunition. Next to it sat a box of medical supplies. Together, they were too heavy for one man to carry. ‘I was faced with choosing between my devotion to medicine and my duty as a revolutionary soldier’, Che later recalled in his ‘Reminiscences of the Cuban Revolutionary War’. He finally chose to pick up the ammunition and played an instrumental role in the Cuban armed uprising along with Fiedel Castro and other revolutionaries which began with a taskforce of 81 guerrillas crossing to Cuba from Mexico in 1956. He was one of the few survivors of Castro’s disastrous Granma landing, which the Cuban army had spotted. Ché Guevara made his way to the remote Sierra Maestra, where he joined Castro and seventeen other Granma survivors – the men who would form the core leadership of revolutionary Cuba.

Che fought bravely in the high altitudinous mountains. He earned Castro’s confidence and was the first rebel to be given the rank of comandante. Marching on Santa Clara in late 1958, his column derailed an armored train filled with dictator Batista’s troops and took over the city. Che’s triumph was the final blow in the rebel military campaign against Batista.

By January 1959, Che, along with the Castro brothers, was recognized as one of the three most powerful leaders of the Cuban revolution. He became a Cuban citizen, divorced Hilda Galea and married a Cuban woman, Aleida. 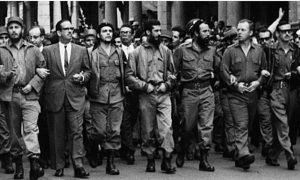 No doubt, his leading role during guerilla warfare was full of adventure and romanticism that makes him a hero worldwide. But what makes him unforgettable and a true revolutionary is his works after the revolution was a success in Cuba. Che’s travels across Latin America, his role as soldier and doctor during Cuban Revolution shaped his vision for the future. Under his extraordinary leadership, the literacy rate of the country climbed from 60 per cent to 97 per cent. The teachers underwent training and the labour force worked on constructing new schools. Che was nevertheless named head of Cuba’s central bank. Later, he became Minister of Industries. He called for the diversification of the Cuban economy, and for the elimination of what he called material incentives. Volunteer work and dedication of workers would drive economic growth. All that was needed was will. Che led by example. He worked hard at his ministry job, in construction, and even cutting sugar cane.

Che’s vision of the New Cuba entailed the selfless, hardworking and non-materialistic service to the nation and Cuba has been successful in revolutionising medicine and biotechnology with welfare of people at its core. The new Cuban constitution included Che’s dream of free medical care for all as a fundamental human right. This gave Che a chance to combine his interest in socialist theory with his thoughts on social medicine into what he called ‘Revolutionary Medicine’. 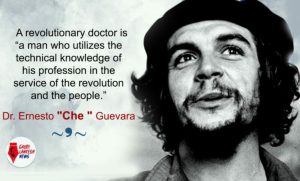 Che’s idea of social medicine went in parallel with the construction of a new Cuba and a ‘New Man’. He hoped this ‘New Man’ to be ultimately selfless and cooperative, hardworking, gender-neutral, non-materialistic, incorruptible and anti-imperialistic. His holistic approach to medicine was more focused on prevention than treatment. Che’s idea of social medicine is further emphasised when he talks about treatment of disease and how doctors should view interconnectedness of health, disease and society. In his words – ‘We shall see that diseases need not always be treated as they are in big-city hospitals. We shall see that the doctor has to be a farmer also and plant new foods and sow, by example, the desire to consume new foods, to diversify the Cuban nutritional structure, which is so limited, so poor, in one of the richest countries in the world, agriculturally and potentially. Some day, therefore, medicine will have to convert itself into a science that serves to prevent disease and orient the public toward carrying out its medical duties. Medicine should only intervene in cases of extreme urgency, to perform surgery or something else which lies outside the skills of the people of the new society we are creating. And our task now is to orient the creative abilities of all medical professionals toward the tasks of social medicine.’ A disconnected social system leads to a disconnected health system. The Cuban revolutionary govt. connected the remote unreachable parts of the island with new hospitals and clinics. along with addressing crises of literacy, racism, poverty, and housing.

Cuba has more than three times doctors per capita than the US. In 2020, eighty-nine thousand doctors, eighty-four thousand nurses, and nine thousand students graduated from the medical versities in Cuba. Fidel Castro defined the medics of Cuba as Cuba’s ‘army of white coats’. For years now this army has been going across countries helping them through epidemics and pandemics of deadly diseases, be it SARS, Ebola, Cholera, or COVID-19. During the COVID-19 pandemic, Cuba sent its first mission to Lombardy, Italy’s worst-hit region. Soon after Italy, it has sent its missions to over 20 other countries. Since 1963, Cuba has been training and sending medical personnels to several nations as part of its international solidarity and humanitarian ventures. Cuba provides more medical personnel to the developing world than all the G8 countries combined. It has 30,000 health personnel including 19,000 doctors in international collaborations in 103 different countries.

Cuba has also invested heavily in biotechnology to develop medicine and vaccines and support a prevention-oriented healthcare system. It developed the first vaccine to treat meningitis B and the only effective treatment for serious diabetic ulcers. Cuba is also the smallest country in the world to develop its own Covid-19 vaccine.

In 1965, Che had renounced all his official posts, given up his Cuban citizenship and left Cuba ‘to fight imperialism, in new fields of battle.’ He wrote in an emotional letter to Fidel, ‘I have fulfilled the part of my duty that tied me to the Cuban revolution… and I say goodbye to you, to the comrades, to your people, who are now mine.’ He reached out Congo, fighting a futile war and barely escaping with his life. He returned secretly to Cuba and decided to return to his native Argentina to bring about revolution. But Fidel suggested that Che go instead to Bolivia, and try to ignite a continental revolution. After six months of vigorous training in the mountains of Cuba, the now legendary Che entered Bolivia disguised as a businessman, determined to turn the Bolivian Andes into another Sierra Maestra.

Che’s guerrilla group, numbering about 120, were well equipped and scored a number of early successes. Then came a series of disasters. The U.S. government located the group and sent CIA operatives into Bolivia. The local population turned its back on the rebels. Bolivia’s Moscow-oriented Communist Party reneged on a commitment to help him. Moreover, Guevara was being hunted by a U.S.-trained elite battalion of Bolivian Rangers skilled in jungle warfare. Che wrote in his diary, ‘The negative aspects prevail, including the failure to make contact with the outside. We are down to 22 men, three of whom are disabled, including myself.’ By September, he was suffering from acute asthma, weakened by dysentery, and surrounded by the Bolivian Rangers. Waging war is sticky, muscle-aching, sleepless work. The real-life guerrillas including Che endured severely blistered feet after marching for days through saltwater swamps. Guevara’s condition was exacerbated by insufficient medication, Bolivia’s altitudinous terrain, and no doubt his incessant cigar smoking. The Bolivian Rangers captured Che on October 8, 1967, at a ravine called El Yuro. The next day he was executed. His body was photographed on a stone slab in a small hut for the whole world to see. On October 12, an American State Department analysis of Che’s death predicted, ‘Guevara will be eulogized as the model revolutionary who met a heroic death.’ 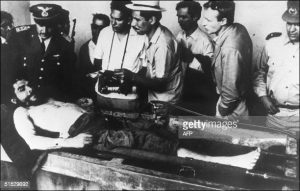 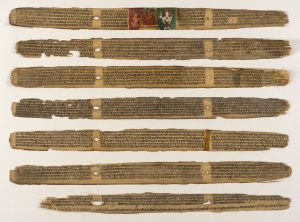 Introduction “The definition of life is to be sought for in abstraction; it will be found, I believe, in this general perception: life is the