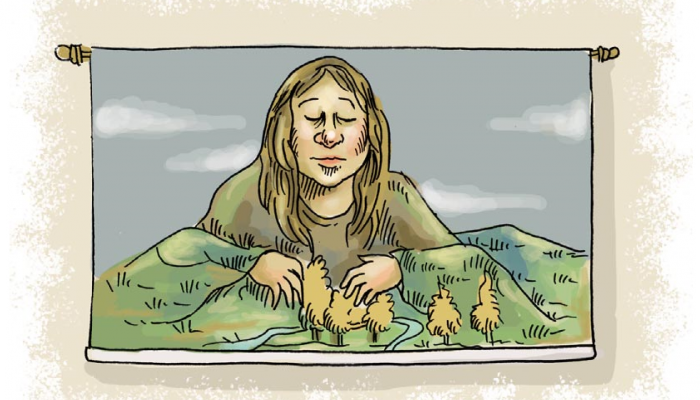 What is medicine? What is health?

Speaking on the theme of ‘what is medicine, what is health?’, the next speaker said that the biomedical model is failing but an alternative model is yet to fully emerge. Health has to do with the condition of the human body but also other things such as food, environment, our sense of well- being and our worldview.

And medicine is not just a substance used to repair the body but it is also about being in harmony with other living beings and the concept of healing. This implies that medicine has to be understood; not just applied to individuals but to the human collective also or even the planet as a whole. In this context it is important to consider the concept of planetary health and the idea of ‘Mother Earth’, professed by indigenous people, which emphasizes relation to health of the planet as a nurturing, care-giving mother.

“Mother Earth again!” muttered Whatsup to himself. What’s with these people from Latin America going on and on about the health of the entire planet, when there were not enough resources to look after all human beings? Was worth following up on to understand this more closely, he thought.

Listening to the next speaker, Whatsup realized that indigenous folk all over the world thought quite similarly. The presentation on “Are we delivering sickness care or health care?” pointed out how in the aboriginal languages of Australia there is no separate word for ‘health’. Instead life and health is seen as interchangeable terms and the emphasis was more on health of the community than that of the individual. Health is not just the physical wellbeing of the individual but the social, emotional and cultural wellbeing of the entire community and the land around it. This is a whole-of-life view and it includes the cyclical concept of life-death-life.

Interestingly, in aboriginal culture asking questions was considered impolite and instead the story telling format was preferred.

“I like that approach, storytelling, it is universally understood and appeals to the emotions. Certainly, more interesting way of engaging people than through boring power point presentations” thought Whatsup. “Even better if one could do this around a campfire somewhere!”

In the discussion that followed it was pointed out that health-seeking behaviour and the different choices people made, varied according to local context. Mapping these choices using the ecological model of health was needed. A delegate asked as to how the current medical model could be de-intensified and the health system made to focus on making humans thrive, instead of emphasizing sickness. Could there be a process of dialogue between different concepts of health to figure out the next step forward?

The next speaker presented a research study on the problem of medicine and health products being smuggled along Thailand’s borders, in particular corticosteroids. Non-labeled and non-registered drugs were brought in from neighboring countries, where restrictions were fewer, to create ya-chud[1], which is an assortment of various medicines put into single packets for simultaneous consumption by consumers. Many of these drugs, including herbal medicine, were contaminated with steroids and sold by hawkers and even at local clinics to the general public. This was a completely unscientific and even unethical thing to do of course but since medicines were considered to be a very profitable extension of ‘magic’, all kinds of crazy practices like this abounded in the real world.

An appeal to include the humanitarian sector in work to improve the use of medicines was made by the following speaker. With 26 million refugees and 41.3 million displaced people living mostly in cities and refugees camps, establishing effective health services is challenging. Problems in procuring and using quality medicines make it harder to help people deal with the many health challenges they face. This deserves greater attention.

Another presentation on ‘Opioid use among Australian nursing home residents from 2014-2019’ found opioid prescribing and harm was increasing in Australia. Nursing home residents were high medication users and at high risk of medication related harm. So this showed how even within a health institution, despite guidelines and monitoring mechanisms, it was possible to easily slip into completely irrational use of medicines.

In the following discussion an issue was raised, that while overuse of medicine was a problem, the lack of access to medicine was also a problem in certain contexts. In Thailand for example there was poor access for cancer patients to pain management drugs, while in India- despite considerable domestic production of drugs, a large section of the population could not afford to buy them.

[1] ‘Ya-Chud’ is a non-prescribed poly-pharmaceutical pack containing several types of drugs, including antibiotics and steroids, which can be purchased over the counter in some parts of Thailand for self-medication.