Who Killed Rational Use of Medicine? 5 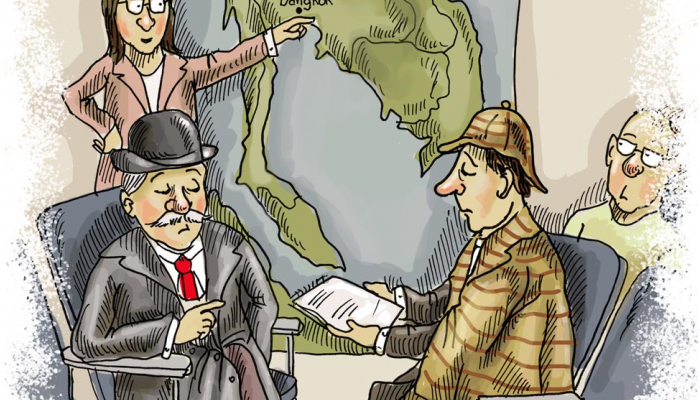 Sure enough, there was a detailed presentation on Thailand’s famous Antibiotic Smart Use project, which involved communities from the start to deal with the problem of antimicrobial resistance (AMR) and  had a deep impact on the country’s policies.

AMR is about how the very use of antibiotics (and not just the abuse),  leads to the selection of resistant bacteria which then become difficult to treat. It is often a complex issue to explain, even to medical professionals, as it involves the interplay of ecological, evolutionary, medical and social factors all at once.

The ASU project, launched in 2006 by a group of researchers with Thailand’s Ministry of Public Health, simplified the complex story by focusing on three common ailments- upper respiratory tract infections, especially common cold with sore throat; acute diarrhea, and simple wounds– for which antibiotics are often prescribed, though they are not needed.

The project then mobilized a community in Saraburi province, north of Bangkok, to change social norms that allowed excessive use of antibiotics for these three diseases. Project volunteers, from the community itself, educated  the public, provided alternative therapies for cases where antibiotics were not indicated and convinced health professionals in the area to moderate their use. The key to the success of the project, which has been replicated in several countries now, was the fact that the community was treated as an equal partner in campaign and not as a passive recipient of medical wisdom.

As the first day of the ISIUM conference came to a close Herlock Sholmes was a bit pensive. The day’s discussions had all been fine but there was still something missing – the answer to the first question any detective would ask at the scene of a crime – ‘cui bono’ or ‘who benefits?’

To his amazement, no sooner had he thought of this than the answer was already being spelt out on stage. It was a presentation on ‘Medicines and Vested Interests in Society’.

Whatsup was raring to get out of the hotel and go to some restaurant for a drink but Sholmes held him back. ‘This is the most important thing you will hear today’ he said.

“The opioid crisis was one of the most serious public health crises in recent memory in Canada, leaving 9000 people dead between January 2016 and June 2018. And it was fueled by drug makers flooding the market with opioids, purely for reasons of commercial profit” the speaker said. Commercial interests in medicine, she said was the proverbial elephant in the room that few wanted to recognize.

For achieving quality use of medicine, patients needed access to complete and unbiased evidence on their benefits and harms, avoidance of over-diagnosis and polypharmacy as well as access to affordable care.

The problem for doctors, while deciding which was the best medicine to use was that globally today there was greater funding, running into billions of dollars, for medical research from private than from public sources. The situation was so bad that even research papers published in peer reviewed journals were being ghost-written by the pharma industry.

“The pharma industry is truly disgusting. I have heard enough now. Let us go get something to drink!” said Whatsup.

“No wait! Get me a pen and piece of paper. I want to explain to you the picture emerging from today’s discussions while the details are still fresh in my mind ” said Sholmes picking up a conference folder with what he wanted inside it.

Soon he had doodled a mind map of the suspects and their likely motives in the slow murder of rational use of medicines: 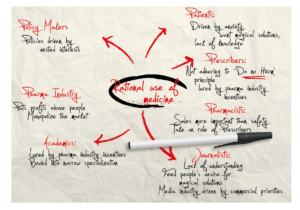 As the two walked off into the sunset, in search of the pier closest to the conference venue,  Whatsup added, a bit worriedly “Do you realize, from a strictly medical perspective, at our age, neither of us should be indulging in what we are about to?”

“If everyone were to strictly follow the doctor’s orders, there would be no joy left in the world”, said Sholmes.