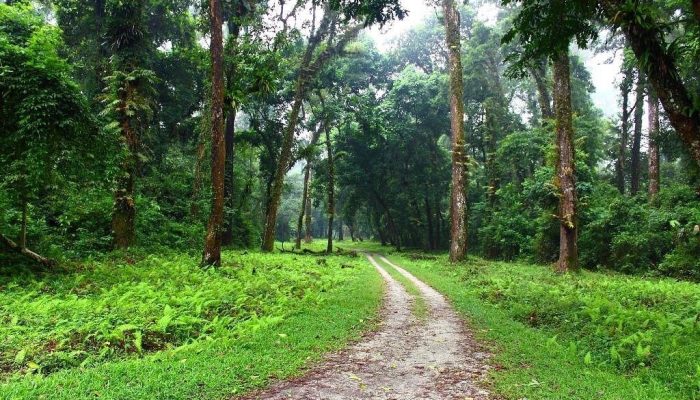 A moonlit night. No man around for miles but for our group of six and the staff of the forest bungalow. When the two kids in our team start arguing over some trifle, our leader growls, “Hush! Just listen. Follow the rules of the jungle.”

We hear the monotonous drone of the crickets – loud and piercing. Well orchestrated though. It stops suddenly – all together. The depth of the silence becomes unfathomable. Then it restarts.

It is evening now in Gorumara forest and the shadows slowly spread into the night. The harsh call of a peacock emits from the left and is echoed from somewhere in the right. Suddenly there is a loud cry from a barking dear.

The birds seem to have all settled down in their nests and we will have to wait till morning to listen to their cacophony. An occasional musical note “Tweet. Tweet” spreads through the air – an unknown bird looking for its mate.

We look down from our vantage point to see a majestic Indian bison in the pale light of the crescent moon, meticulously adorned in white socks in all its four legs and the glistening white war paint amid the powerful horns. A large one horned rhino ambles towards the salt lick but the wary bison holds its ground.

Suddenly from the distant shadows emits an earth shaking trumpeting call of an elephant. We tremble in our seats while the bison and the rhino look up. In a few moments we see a faint outline of a large horde of elephants approaching. But they do not favour us with a better view. They cross the rivulet in a single file and pass away into the distant forest.

Our dream tour started from the bungalow of Kalyan Das, Divisional Forest Officer (Territorial), Jalpaiguri. Being a DFO, I mused, must be a lot of fun – roaming about in places we always dream about and seeing sights we rarely see. I wondered why Kalyan, a long time friend and a younger brother to Dilip, our team leader, looked so grave and weather beaten. In his middle forties he looked much older.

In the next four days we solved the puzzle in bits and pieces. Kalyan and the likes of him have lots to do and worry about – lot more than me and I fancy myself as a busy doctor.

They have to protect the jungle and at the same time act saviour to the human settlements around. When an animal strays in localities then you have to bring the animal back into its habitat safe and unhurt. If it has destroyed crops, then you have to decide on the compensation. If a man is injured or killed during the whole saga, well there is the forest officer to put the blame on.

Then there are new tourist spots to be developed without disturbing the flora and fauna. This is a dilemma in itself – a Catch 22 situation.

Next there are animal censuses to be carried out, which essentially mean updating yourself with newer technologies and getting familiar with statistical tools.

And finally there is the nightmare of the debates in the parliament when you have to sit up in the middle of the night to prepare answer scripts for the ministers faced with awkward questions from the opposition.

Our four day tryst with the jungle began in Jaldapara. Dusk was approaching when we reached the Hollong tourist lodge and we straightway settled down by the rivulet in front of the lodge with high hopes for a cat-walk (literally) to start in the salt lick a mere 100 yards away.

We were not disappointed. First came a midget rhino slow and unperturbed, followed by a small herd of elephants with three babies, fidgety and nervous. The trumpeting call of the tusker signaled the entry of another rhino in the arena, a large bull and the elephants sauntered away.

The stage is now vacant but not for long. A horde of bisons enter the frame and the parade continues till late night.

The morning show brought in the birds. Large flocks of parakeets highlighted the show, flying around in a perfect squadron and settling down on a tree for a few moments. On a mysterious signal they soar up synchronized – dive down and then zoom up barely touching the ground – a regular Chinese ballet.

The Bundipani forest rest house told us a sad tale of man made ecological disaster. River Sukhti flowing from the nearby hills in Bhutan had all dried up. Now all that flows in the river is dolomite dust from a mine up in the hills made for the benefit for a cement factory in Bhutan.

The river has dried up and the people have lost their means of livelihood. It is a dry forest, brown and sun perched, but elephants still roam and birds try to keep the place alive.

In an effort to rejuvenate the region Kalyan and his colleagues are constructing a tourist lodge with a difference. They have included the local villagers in the planning and maintenance so that these poor people can get a share from the earnings of this lodge.

But it is here that we met Manas Acharya, Range Officer. In the evening amid a fierce storm, he came in full battle gear – camouflage dress and rifle and all. On the wrong side of fifty he was slim and trim with a juvenile waistline and looked not more than thirty five. Manas is what legends are made of. He had tales to tale and marks to show on his body – he was pounded by a bison and mauled by a leopard. But he loves the jungle and as per the rest house staff avoids promotion to remain a range officer.

Our next destination was Gayerkata bird observatory, which turned out to be one of the most memorable part of our tour.

The four story observatory complete with study room, bed room with fairy tale bunks and an observatory at the top was said to be another of Kalyan’s achievements like the Leopard Rehabilitation Centre in Khairibari.

In serene surroundings you can lose yourself in the different shades of green. There is a large jheel fed by a river where flocks of birds swam and took flight. I will definitely go back to this sanctuary just to spend a couple of nights and meditate.

The last leg of our journey to Jaldakha was a sad disappointment. The once beautiful bungalow overlying the river is a story of apathy and neglect. The political turmoil in the hills of Darjeeling has had its impact no doubt.

In the great order of things, we humans would fare better if we acknowledged that we were a part of the animal kingdom instead of playing the monarch.

Casually started reading. But you draged me to the last by your compelling poetic compositions. Kudos daktarsab!