Who Killed Rational Use of Medicine? 7 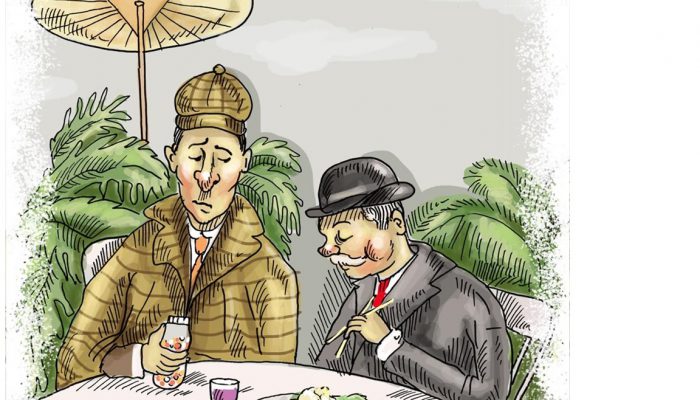 The “School Garden and Microbial World: Healthy nutrition” project that began in 2018 taught the children to sow, take care of gardens and harvest, as well as share healthy food recipes.  As part of the project the children also learnt how to reduce the consumption of medications and antibiotics by understanding the concept of ‘food as medicine’. They in turn influenced the health awareness of their parents and grandparents along with their friends.

“Yes, food has been the real medicine for most people around the world for centuries but whose role in health has been highly neglected in our times. These days it is pills and tablets that are consumed like food,” said Whatsup, remembering the delicious dinner from the previous night.

Like in many cuisines around the world, the Thais used a wide range of herbs and spices in their cooking – ginger, turmeric, garlic, galangal, kaffir lime leaves, coriander, lime, pepper. Each one of these came with its own medicinal properties and had traditionally helped keep people healthy, much before the advent of modern medicine.

“Why do you think the concept of food as medicine, which used to be popular for centuries, has gone completely off the table?” Whatsup asked Sholmes.

“Again, follow the motives, Whatsup. There is a huge lobby that wants to push packaged pills, potions and procedures as the only solution to all health problems. There is a lot of money being made by them as people get dependent on their medicines”, said Sholmes. The propaganda machinery of the modern pharma and medical industries makes it difficult for people to make informed choices about both modern and traditional approaches of medicine.

An interesting story of how it was possible to successfully challenge the might of the pharma industry was recounted by the next speaker, based on her experience as a consumer health activist in Australia.

Asking questions in public about inappropriate medicine use, she said, had initially provoked a hostile reaction from powerful vested interests, that included not just the pharma industry but also health professionals, drug specialists  and pharmacists. In other words, the entire medical establishment.

This convinced her that the questions she was asking were correct. By insisting consumers be part of any decisions taken regarding  medicines, she then managed to turn the conversation with the authorities upside down. Finally, when she and her colleagues produced a report that showed the research and data to support their case, they were invited to take a seat at the table and be a part of the process to create a policy that helped people improve the use of medicines. What this showed was that, if you put together detailed arguments with evidence and persisted long enough, you would succeed in achieving your goals.

During the tea break Sholmes and Whatsup decided to circulate a bit among the delegates. This would give them a better insight into how different people approached the issue of rational use. The participants were from across the globe, from all five continents, representing a great diversity of health systems, national cultures, local settings and approaches to life itself.

A majority, however, were people trained in or working with modern medicine – general physicians, pediatricians, epidemiologists, pharmacists, health administrators.  There were communicators, journalists, health and social activists too.

Sholmes joined a small group of delegates who were having an animated conversation comparing modern medicine with traditional medicine systems.

“Where the essence of modern medicine differs from the traditional systems is its greater ability to discard what cannot be proved to be beneficial and what can be proved harmful,. Traditional systems – while contributing historically to the development of medicine – have not been able to change in the light of new knowledge. They have hung on to assumptions about disease and treatment, many of which may be invalid today”, the professor was saying.

“You mean, invalid from a primarily modern medicine point of view?” asked the young lady. “First of all, the methods of modern medicine cannot be used to judge the merits of traditional medicine because their worldviews are quite different. Secondly, modern processes like urbanisation and industrialization have destroyed traditional and indigeneous ways of living everywhere around the world today. So that is like breaking someone’s legs deliberately and then accusing them of not being able to walk or run!”

“But modern medicine produces better results when it comes to treating sick patients, which is not true of traditional or alternative systems” said the doctor.

“Results depend on what you want to measure. While narrow individual outcomes are sometimes better with modern medical procedures, they impose a high cost on everyone else. Like in the case of antibiotics, which are very effective for individuals with infections but result in disturbing the overall microbial ecosystem, which is detrimental to everyone else” said the lady, passionately arguing her point.

Sholmes was impressed with the discussion, which despite being somewhat inconclusive went to the heart of the problem of ensuring rational use of medicine. It was ultimately somewhere linked to making a choice of approaches that either prioritised the health needs of individuals and small elite groups or that of the larger human collective.

In other words, it was a matter of whether the medical system was a truly democratic one or something run by small, special interest groups, such as pharmaceutical industry lobbies, medical professional bodies and funding agencies .